Drainage season is really upon us now. Every year is the same, working flat out on stubble fields after harvest. Our new plow is being put through its paces in Shropshire as I type, then its back closer to home before heading southward. With harvest delayed we have not a minute to spare 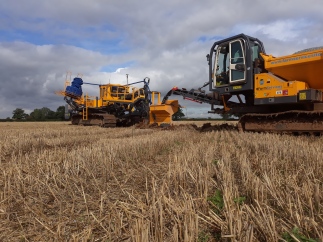 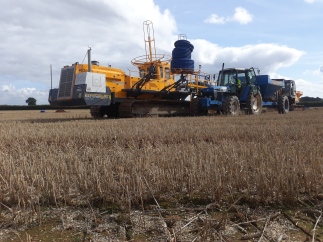 Very pleased to announce that our new workshop and machinery store is starting to take shape. This is a big project for us and the first new building on our yard for over forty years. Hopefully before long we can be repairing and maintaining our plant in warmth with plenty of space. 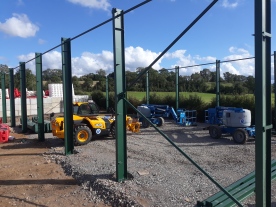 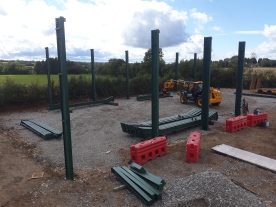 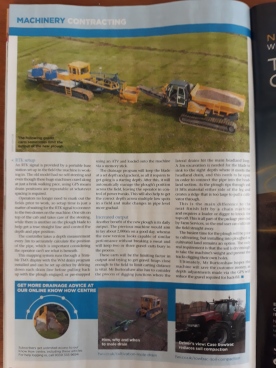 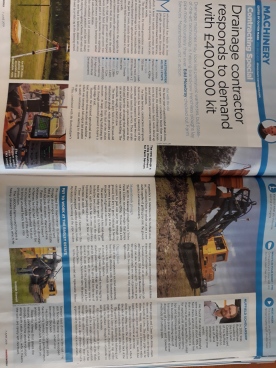 Here are some pictures of our new Mastenbroek 40/20 Drainage plow. It is the first drainage plow built in and operated in England for over thirty years and is one of  the most unique and advanced drainage machine in Europe. It will be the largest investment ever made by the company in its seventy five year history.

The custom-built machine is 32 tonnes and is capable of laying 60mm, 80mm, 100mm and 160mm diameter plastic land drainage pipe to a depth of 1.8m. It features a stage four Volvo Penta TAD1372VE diesel engine capable of producing 315kw /428hp. Grade control is via RTK GPS allowing for quicker and more accurate installation than Laser grading. 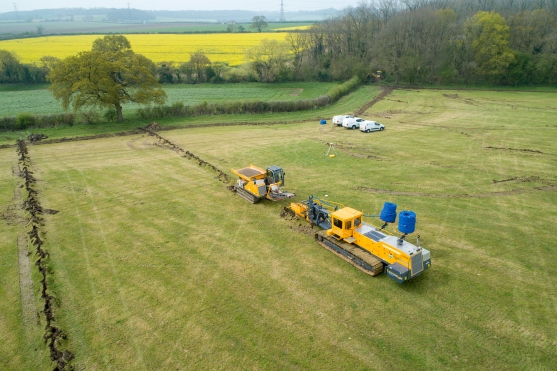 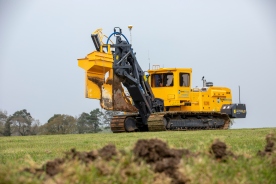 Farm Services Ltd are looking for a contractor(s)/suppliers to carry out the construction of a new steel frame workshop and storage shed at our premises based in Chesterton Estate Yard, Banbury Road, Lighthorne, Warwickshire . We are tendering for quotes for the completion of the following:

We expect to commence this project as soon as possible i.e. late May early June 2019 with completion by November 2019 at the latest. Payments will be made in instalments as each phase of the project is completed as above. We will assess each bid for the tender in the following way:

If you are interested in tendering for this opportunity of would like to know more, please contact the team on info@farmservicesltd.co.uk or give us a call on 01926 651540

Farm Services Limited is seeking the right candidates to join the company. Founded in 1942 the company has a number of vacancies. You will be part of a drainage team installing pipe work in the agricultural, construction and sportfield sectors. Ideally the candidates will have experience operating plant such as tractors, wheeled excavators and 360 degree excavators (CPCS cards a plus) However the most important attribute is the right attitude, we’re looking for people willing to get stuck in and work hard. In return you will receive onsite training and the possibility of rapid promotion.

All positions are subject to a trail period and from time to time, overnight stays will be necessary. Pay will be dependent upon experience and skillset. To discuss this opportunity further, in confidence, please call Rob Burtonshaw 01926 651540. All applications will need to be made to:

Farm Services Ltd. has made the largest single investment in its history. From April 2019 the company will expand by operating a new drainage machine complete with GPS grade control technology. This machine will enjoy cutting edge technology and allow the company to greatly improve its efficiency and service. This project has been partially funded by a grant from the European Agricultural Fund for Rural Development. More information will follow shortly. 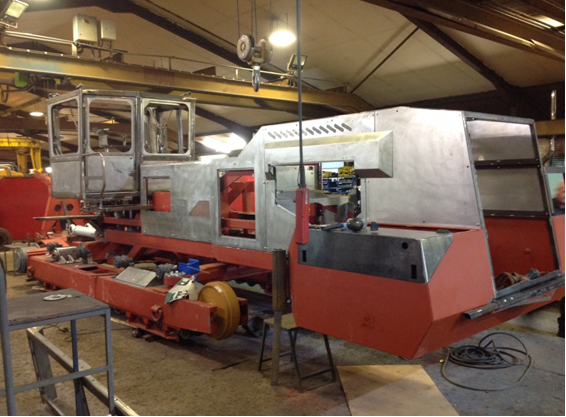 Is part funded by the European Agricultural Fund for Rural Development 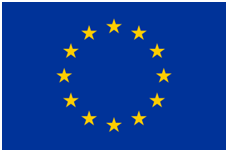 Whilst in some parts of the world this is common, working in the snow only happens rarely for us so I thought a couple of photos were in order. In fact the snow made little difference to us and the ground was frozen hard below it. If conditions allow crack on. 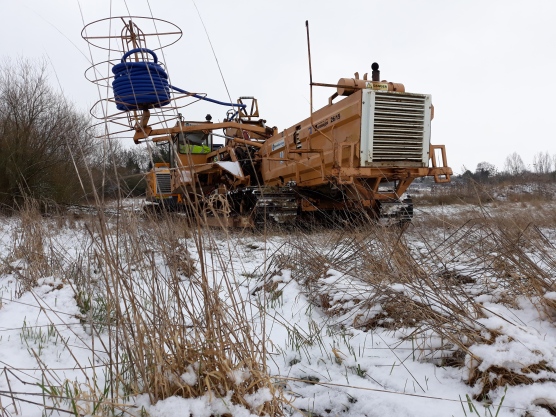 Over on twitter a little while ago I posted a series of tweets about Land drainage, I thought I would put them all on here in one place

The materials used for backfilling early drains were those most easily obtained, so a variety of drain types evolved, utilising stones, bricks, straw ropes or hedge trimmings for example.

Jospeh Elkington from Warwickshire was an early drainage pioneer who used an understanding of soil types and the water table to drain land. So grateful was parliament that it awarded him a grant of £1,000.00 in 1795.

About 12M (1.3 billion today) was loaned from 1850 to 78 by government and private companies to install drainage, also many landowners drained land with their own money

In 1845 Thomas Scragg, invented a machine for producing drainage tiles, which brought their price down by some 70%, allowing drainage to be carried out on a large scale for the first time

Often it is not possible to date old pipes accurately, but those stamped with ‘DRAIN’ were almost certainly made between 1826 & 1850 as field drains made in this period were exempt from a tax on clayware if so marked.

Drainage is mentioned in the novel Middlemarch by George Elliot, 1871 “see that your tenants don’t sell their straw and give them draining tiles you know but your fancy farming will not do” (abridged)

Ridge & furrow was one of the oldest practices to ensure that at least some of the land was moderately well drained, especially in clay areas, where it exploited the natural properties of the clay to dispose of surface water by run-off

Despite all the benefits of modern(ish) equipment & materials, the 250,000ac drained each year in the 1970’s & 1980’s was still well below the annual peak of the C19th drainage mania, all of which was installed by hand

Soil strength is direct linked to the water table. As many who have ended up axle deep will understand…

Traditionally in land drainage, distances where measured in rods and chains. 1 rod equals 5.5yds/5m and a chain 22yds/20m 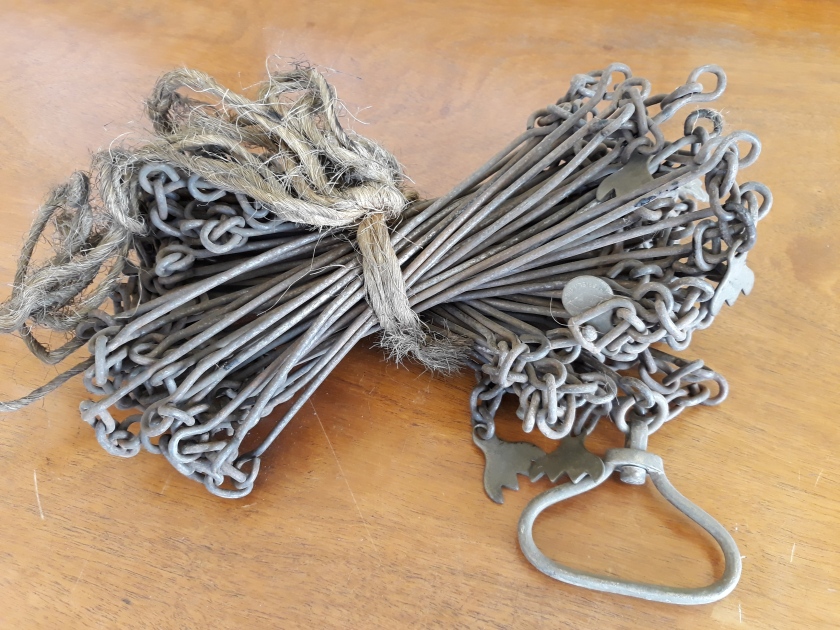 Drainage has a long history, the oldest known systems date back some 9000 years in Mesopotamia, Drain pipes were in use 4000 years ago in the lower Indus Valley and bamboo pipes were used in ancient China

Plastic Land drainage pipes (up to 200mm diameter) and connectors should conform to BS. 4962

The life expectancy of pipe drains should be at least 10 years, with 30-50 years as typical. Some may continue to function for much longer, and many drains installed in the last century are still working perfectly

If a permeable backfill is to be used then it must be clean, free from dust or soil and be between 5mm and 50mm in size. Preferable smaller than 40mm.

The minimum depth of cover over any land drain should be at least 600mm (preferable more), which is deep enough not to interfere with moling ploughing or any other agricultural practice

All drains need to be laid to a regulated grade thus allowing water to move in the desired direction via gravity. Grade is calculated by the following equation. Difference in height over distance, times by 100.

Land drainage only removes water which is able to move through the soil. Once the field is at field capacity the drains stop running. Many thanks to @ClarkFarmDrain for the picture

After the Second World War, two million ha of agricultural land was drained in England and Wales, through grant aid. Peaking in the 70’s and early 80’s when over 100,000ha of land was being drained each year

Plastics pipes were first accepted for grant-aid in England & Wales in 1964. There was steady increase in use from only 4% in 1971 to over 80% by 1980. Soon after practically all land drains laid were plastic.

Grant aid was removed from Land Drainage in the early 80’s as you can see from this graph the effect was massive. In historical terms very little drainage has been carried out in the last thirty five years in the UK

You can install land drainage in many different ways but it is mainly done with specialist equipment such as chain trencher, a wheel trencher, a straight plow or a v plow.

GPS is now taking over from Laser for grade control. It is just as accurate and has a number of advantages in set up and design.

25% of the Netherlands is under sea level, 65% of land would be flood if not for water management.

The sandy soils of the Netherlands often block land drains with silt, along with regular jetting most pipes are installed with a wrapping, many things have been used including old carpet, coconut husks & polystyrene

A great deal of drainage was installed in the Netherlands during the second part of the 20th century, in total some 750,000 ha in the ‘old lands’ and 150,000 ha in the new ponders were drained.

John Johnson (Seneca County, NY, USA) was an early drainage pioneer, his neighbors laughed at him burying crockery but stopped when he produced 50 bu/acre where previously 5 bu/acre was harvested. He became know as “The Father of Tile Drainage”

John Johnson eventually laid 72 miles of tile drains on his farm and stated that his considerable success was due to “D, C and D”—“dung, credit, and drainage.”

If you wish to operate as a drainage contractor in Ontario you will need a machine licence, a business Licence & machine operator licence which comes in three parts Class C for apprentices, through to Class A for experienced operatives.

All completed drainage schemes should be recorded with an ‘as laid’ drawing (this was compulsory for grant aid). Both the client & contractor should keep a copy, we have thousands of completions plans going back to the 1940’s 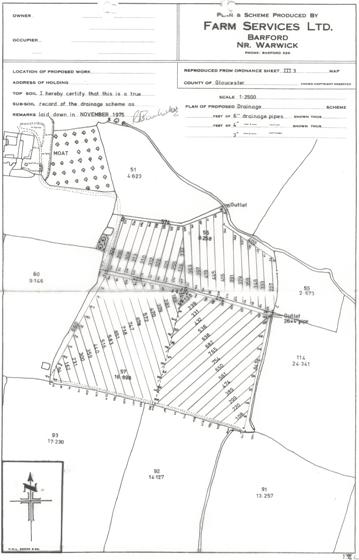 Overtime a set of standardised symbols and colours have been developed for drainage completion plans in the UK. As the picture below shows a standard key (it is taken from the @AHDB drainage guide)

If you happen to be in Columbus, Ohio on a wet Sunday afternoon it is the home of the Drainage Hall of Fame, 81st out 120 things to do in Columbus on Tripadvisor…..

Farm Services Limited is seeking the right candidates to join the company. Founded in 1942 the company has a number of vacancies. You will be part of a drainage team installing pipe work in the agricultural, construction and sportfield sectors. Ideally the candidates will have experience operating plant such as tractors, wheeled excavators and 360 degree excavators (CPCS cards a plus) However the most important attribute is the right attitude, we’re looking for people willing to get stuck in and work hard. In return you will receive onsite training and the possibility of rapid promotion.

All positions are subject to a trail period and from time to time, overnight stays will be necessary. Pay will be dependent upon experience and skillset. To discuss this opportunity further, in confidence, please call Rob Burtonshaw 01926 651540. All applications will need to be made in writing to:

For the last couple of years the Farmers Weekly has hosted the Mudhound blog, but I guess nothing lasts forever. The magazine has decided to cut back on its forums page (I think everyone has moved over to twitter) and is no longer offering blogs, therefore this humble blog about the goes on at Farm Services has moved back to the Farm Services Web page. Expect the same rambling comments about the weather, mud and putting pipe in the ground, up dated every month or so. If your keen to hear even more about the life of a drainage contractor (who would not) then you can also follow us on twitter @FarmservicesLtd